As a rule of thumb, if more than half of a tooth's original crown portion has been lost, a post is needed to assist in anchoring the core to the tooth. If a greater amount of tooth structure remains, a core by itself will probably suffice. Traditionally, dental posts have been made out of metal (stainless steel, titanium). In today's marketplace, a dentist may choose between metal and metal-free carbon fiber posts. Both types come in a variety of designs. How does a dentist place a post and core? 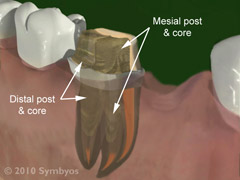 Placement of a post in a tooth that has had root canal treatment. Placement of a crown on a tooth that has had root canal treatment. When placing a post and core, the dentist will first use their drill to create a post space whose alignment follows a path in the filling material that was placed during the tooth's root canal treatment. Then a post specifically sized (or fabricated) to match this prepared space is then cemented or bonded into place. Once the post has been secured, a dental core (a bulk of dental restorative) is placed around and over its exposed end. The dental core will be anchored both by the post and natural tooth structure. The purpose of placing a post is to anchor the core, not to strengthen the tooth. 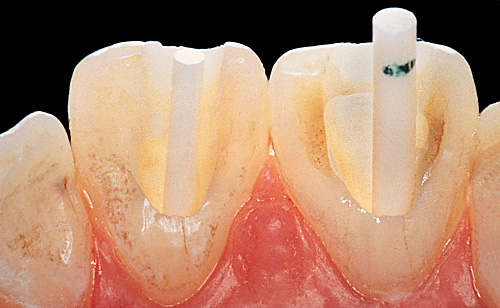 Just as a point of information, in decades past there was a misconception that the metallic dental posts used during that era helped to play a role in reinforcing (strengthening) the teeth in which they were placed. To the contrary, dental research has since shown that in reality these metal posts offer no reinforcement benefit and, in fact, their placement can actually weaken a tooth and lead to fracture.

As evidence of this, Willershausen (2005) evaluated 775 endodontically treated teeth. This study found that as a group the teeth had a 6.6% complication rate. In comparison, a 13.2% complication rate (such as root fracture) was found for those teeth in the study group that had had a metal post placed. 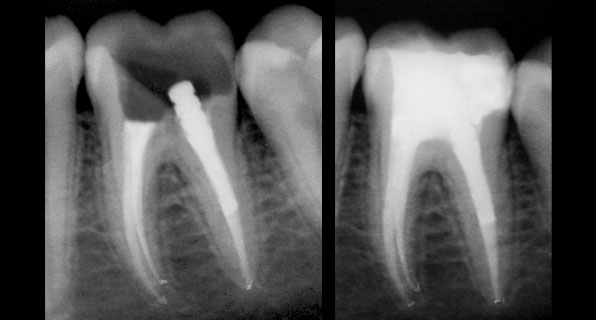 This is not to suggest that post placement is a "bad thing." However, nowadays dental posts should be recognized as simply a way to help to anchor a dental core in a tooth. If enough natural tooth structure exists that it can be relied upon to securely hold and retain the core, then no post is needed. In those cases where a post is needed, the dentist must choose a type and associated protocol that allows for the placement of the post without unduly weakening or stressing the tooth's integrity.