"Wisdom teeth" are classified as molars. Molars are the chewing teeth found furthest in the back of the mouth. Most humans have first, second, and third molars.

A person's third molars are their wisdom teeth. These teeth come in behind the 2nd molars (if there is necessary room for them and they are aligned properly) usually during a person's late teens or early twenties. In most cultures, this is the ages of maturity, hence the term "wisdom." Usually there are four wisdom teeth: upper left, upper right, lower left, and lower right.

In dental terminology an "impacted tooth" refers to a tooth that has failed to arise completely into its expected position. This unfortunate failure to erupt precisely may occur either because there is not space enough in the jaw for the tooth, or because the tooth's angulation is improper. The impacted wisdom teeth often partially erupt at the later ages (45-55). Not only they are difficult to extract at that age, the healing time is much longer. 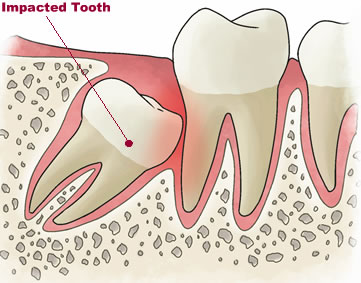 The alternative to having wisdom teeth removed is to keep them. A few lucky people are able to retain their wisdom teeth and care for them as they would their other teeth. People with large jaws (blacks and African) can often keep their wisdom teeth because their wisdom teeth have room to erupt properly in the mouth. But for most of us, this isn't possible, and a postponement in their removal can cause grave problems.

The most common problems linked with wisdom teeth include cavities, gum inflammation (pericoronitis), facial abscess (cellulitis), cyst, crowding (occlusal malaligment, and numbess (parathesia). In rare circumstances (about 3-5 in Texas each year), the wisdom teeth's infection can travel downward and cause airway obstruction and sudden death. Moreover, in traditional Chinese medicine, the four wisdom teeth are associated with the four chambers of the heart. A problem with the wisdom teeth creates a "block" in the Meridian (energy) system, leading to heart's trouble. 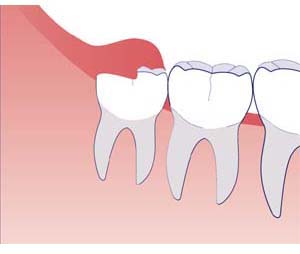 The wisdom teeth usually cause trouble when the body is under stress such as final exam, moving to new location, and pregnancy. For example, during my oral surgery residency in Houston, I witnessed the single abscess of the lower wisdom tooth led to two deaths--the 35 year-old diabetic pregnant mother and her 6-month-old fetus.

The best time for the surgical removal of the wisdom teeth is when they are about 2/3 of the fully developed sizes. This is typically at the ages of late teens or early twenties. Currently, there are two common practices for surgical removal of the wisdom teeth. The most common recommendation is to remove all four under intravenous sedation and local anesthesia. Alternatively, you can unilaterally extract one side (upper and lower wisdom teeth), two at a time, 3-6 month apart, under local anesthesia.